A positive attitude is crucial for success

by prepareforcanada.com | Feb 19, 2013 | After you Arrive, Employment In Canada, Working Success Stories 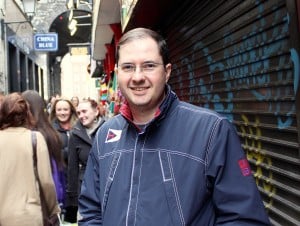 When Andre Esbizaro came to Toronto as a student in 2005, he intended to study English for several months, to learn a little French and then go back to Brazil.

Esbizaro found himself all alone in a city where he could hardly understand a word of what people were telling him. It was challenging even to order food at McDonalds, he says with a laugh.

It was a long way from his life in Brazil. With a bachelor’s degree in business information systems and a master’s in information science, he could easily find jobs in his country. In fact, before coming to Canada, he had worked for three companies and taught at a university in Campo Grande. Esbizaro had also been about to start his doctoral studies in Brazil, before deciding to come to Canada. However, the hardship he faced during his first months in Toronto made him set a different goal —to overcome those difficulties and pursue a new life in Canada.

At times, when Esbizaro felt stressed and thought of going back to his country, he would call his brother in Brazil for advice. “I was telling him that I will never learn this [language],” he says. “I said, ‘I don’t understand what they’re talking about. It’s too fast. I watch TV and I don’t know what they were talking about!’ and he always said, ‘Hey, wait! Keep calm — you‘re going to learn it [English]. You’re going to get it.’”

One day when Esbizaro was feeling depressed someone told him, “You know what — it is all about your attitude. If you change your attitude, you will change your life.” This was the turning point for Esbizaro. He tried to look at his situation from a different perspective. He became interested in motivational books and started watching motivational videos.

With his new, positive attitude, Esbizaro decided that instead of concentrating on his problems in Canada, he should do his best to overcome the difficulties. That meant staying in Canada, studying more English and trying to find a job in an English-speaking environment.

Six months after coming to Canada, Esbizaro applied for permanent residency. The big challenge was meeting the IELTS score requirements. For two years he worked very hard on his language skills and finally passed the test with the necessary score.

When he obtained his permanent resident status, Esbizaro started his job search. He joined programs for immigrants and learned how to write resumes and look for jobs. He also attended an IT-related English course at a Jewish organization and visited the Learning Enrichment Foundation, where he took a project management course.

Through Career Bridge, an internship program run by the Toronto-based nonprofit Career Edge Organization, Esbizaro applied for internships and was invited to two interviews. He succeeded in both and had to choose whether to work for a bank or at St. Michael’s Hospital. He chose St. Michael’s because he had never been in the healthcare industry and was enthusiastic about gaining new knowledge. The position was information management specialist. When his internship finished, Esbizaro received the Intern of the Year award, but, more importantly, his contract was renewed.

After working at St. Michael’s Hospital for two years, Esbizaro learned about a company that was looking for a project manager, so he applied. After three interviews over the phone, one in person and some email communication, he was hired.

“The most important thing when you go for an interview,” Esbizaro explains, “is attitude — you have to be positive. And confident. You have to remember that you know things and you have the experience. You are only in a different country. If you were in your country, you would feel comfortable enough to say whatever you needed to say. It is the same here — it is just another language.”

According to Esbizaro, interviewers highly value sincerity. “I believe they choose the candidate they like,” he says, “not the one that is most skilled or the one with the best English. Of course, you have to have the necessary skills … But at the same time you have to get along with the person. However, most people try to fake, they plan how to say things, but it doesn’t work. You have to be natural. You have to be yourself and express yourself. Because if you try to change the way you talk, if you study some questions and answers, and you just try to repeat them when you get there, I don’t think it’s going to work. I believe if you are face to face, people can feel if you are true or not.”

Having overcome the language barrier, Esbizaro understands that learning English is a process that takes time and practice. You start from knowing nothing and work towards mastering the language. However, Esbizaro warns that many language courses promise fast results in only a few months and people get unrealistic expectations. These expectations may result in big stress and disappointments.  “For example in Brazil,” Esbizaro says, “they usually sell the idea that if you go to Canada or U.S. and stay there for a month to six months, you’re going to become as fluent as an American or a Canadian. Of course, it is not true, but people buy it because they don’t know.”

Esbizaro believes that by sharing his experience he will help other immigrants in Canada, and dreams of becoming a professional coach. “I want to write a book to inspire individuals, reduce negativity and boost positive feelings,” he says.