From engineering to environment: How a mentor helped an immigrant’s journey to work

by prepareforcanada.com | Aug 7, 2012 | After you Arrive, Employment In Canada, Working Success Stories 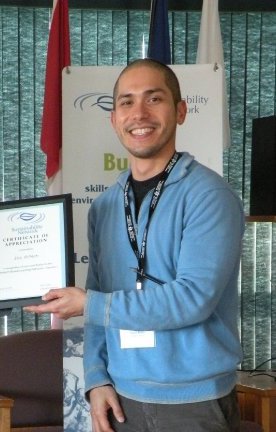 When Victor Reyes left the Philippines to pursue his Master of Engineering in Australia, he didn’t think he will end up in Canada. And just when the idea of staying in Australia started to tempt him, he fell in love with a Canadian, got married and moved to Toronto in 2006.

Reyes didn’t do any research. When in Toronto, he contacted a credential evaluation service and had his degrees certified.

The next logical step would have been having them recognized by a professional body such as the PEO. However, Reyes didn’t really look into it, because he had already decided not to practice engineering. “Early on, I knew I wanted to work for an environmental non-profit,” he says.

His plan was simple. Identifying the well-known environmental NGOs in Toronto, check their job postings online and send them his resumes.

But with his online applications unanswered, Reyes approached Job Start, a Toronto based community agency connecting people to employment. There he covered the basics of job search such as writing a resume, a cover letter, and following up.

“The best advice they gave me was to be very persistent, very patient and to keep sending out (my) resumes.”

Reyes didn’t stop here. He complemented this with volunteering for different organizations. Not because he wanted to get jobs there, but because he needed to make connections and get references for a Canadian job experience.

Reyes continued to send his resumes. And this time, the result was different. He started getting invited for interviews. And despite all the job techniques he had acquired, he went to his first job interview unprepared.

“They asked me about my salary expectations and I never really thought about that. Had no clue,” he says. Giving them a very high figure resulted in him not getting the job, but taught him a very good lesson. “If I get asked this question again, I should have a good answer.”

“The best advice they gave me was to be very persistent, very patient and to keep sending out (my) resumes.”

Then Reyes applied to the Sustainability Network, an organization working with environmental non-profits. And though he didn’t get the job, he established a professional relationship with the organization’s Executive Director Paul Bubelis.

Bubelis became his unofficial mentor, highly recommending Reyes to other environmental organizations looking for employees. After a while Reyes landed his first job at the Ontario Land Trust Alliance.

A year and a half passed when the opportunity at Sustainability Network knocked on his door again. The other candidate, who was hired for the job Reyes was interviewed for, had left. And Reyes was quick to replace him.

As the organization’s Environment and Diversity Project manager, Reyes today helps many Canadian environmental associations reach out to newcomers to the country. His work makes new Canadians more connected to their new home and gives them a feeling of “stewardship to this land”.

Says Reyes, “I think if there’s a big difference between who I was several years ago and who I am now, it’s that I can call Toronto home. I feel like I’m part of the city and the network of people that make up the city.”

Through his work, Reyes meets newcomers often and compares his immigrant experience with theirs. He never forgets to tell them about the importance of networking and making connections. He also gives them three pieces of advice: be polite when meeting people, go to a meeting with a positive attitude and just have fun. He realizes that this might sound lame, especially if there’s a “desperate need for a job because you need the money.” But “if you’re looking for a job, I think the people who have the most positive attitudes get hired. Because it’s easier to work with someone who has a positive attitude.”

As well, he advises them not to be shy and talk to people. “Get proactive, put yourself out there and you will be able to see the opportunities.”