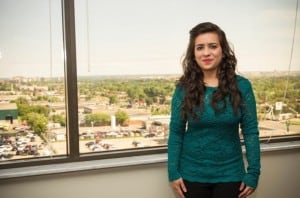 Lack of Canadian experience is one of the greatest concerns for a job searching newcomer. It’s a phrase that new immigrants to Canada know all too well because of the barriers it poses to their employment prospects. So what happens when you’re a new immigrant to Canada with no prior work experience? This is the story of Meghna Bhatia.

Meghna has an educational background in IT, but shortly after graduating she got married and joined her husband in Canada. As a result, she was unable to gain any work experience in her field before moving to Canada. Things were happening so quickly that she had no idea what to expect when she arrived. All she knew was that since she was seventeen, her dream was to work as a .NET Developer.

For Meghna, it was a challenge from the beginning. Lack of Canadian experience makes job seeking difficult enough, but her lack of any prior work experience only made the situation worse. The odds of securing her first job were daunting. While still in India, people promised to help her find a job when she arrived in Canada. Meghna quickly realized that those were false promises, and a sense of abandonment only added to her fears.

Frustration began to set in as she applied daily for positions without any response whatsoever. “Rejection may have been easier to handle, but I never even heard back from any of my applications. I was devastated that I didn’t even hear back from an employer hiring for a survival job,” Meghna says.

That’s when she discovered the .NET Bridging Program at Humber. “The program was a perfect fit for me because I specifically wanted to work as a .NET Developer!” Meghna says. However, she still needed to refresh her knowledge. “The last time I even practiced on the software was a couple of years ago. Coding is something that you will forget unless you constantly practice,” she explains.

Despite her struggles, Meghna decided to enrol in the .NET Bridging Program at Humber in the hopes of finding a job. She worked closely with the Job Developer of the program, Meena Dowlwani, and she believes this made all the difference. “It was so important that somebody give me a chance, and it was Meena who helped me get that chance,” says a thankful Meghna.

Immediately after beginning the program, Meghna worked as an IT volunteer to gain some Canadian work experience. That’s when the Job Developer sent Meghna a job lead at ASL Consulting, one of the industry partners of the .NET Bridging Program. Meghna applied, and on the last day of her volunteering role, she interviewed with ASL Consulting for a full-time permanent job as a .NET Developer.

Meghna cracked the interview and secured the job. She had achieved her dream of working as a .NET Developer even though her hurdles seemed insurmountable. “I love coming in to work here because this is what I have wanted since I was seventeen. It was my small little dream to be a professional .NET Developer in Canada. I feel blessed,” Meghna says. “Not too many people helped me during my struggle, but our Job Developer, Meena, is a big reason of why I’m sitting here right now,” says a grateful Meghna.

Meghna’s story isn’t just a success story; it’s a story of succeeding against the odds. Despite her situation, she was one of the first students to secure a job so early in the program. Despite this, she continued with the program as she saw great value in the course content. Now working in her dream job, she shares a piece of advice for other newcomers to Canada. “Be open-minded and don’t doubt yourself. I was in a classroom with people with up to ten years of experience, but I kept an open mind to a volunteering opportunity and this is what helped me get my dream job. Every immigrant goes through their own struggle but we should never lose hope. Struggle always makes a person stronger and more patient. It wasn’t a piece of cake for me and that’s why I value what I have.”

ASL is a leading provider of Hire-to-Retire Software and Professional Services. For over twenty-six years, the company has developed and delivered world-class Human Capital Software Solutions to public, private-sector and not-for-profit organizations. Today, ASL’s technology is used in over forty-nine countries globally. Visit http://www.aslconsulting.com to learn more.

ASL has been extremely supportive to Humber College in many ways.

“ASL is 100% committed to supporting Diversity and Inclusion within our workforce. Diversity and inclusiveness makes us stronger and more globally competitive. We have a long and proud tradition of employing and developing individuals from varied backgrounds, including newcomers to Canada, and we’ll continue to do so in conjunction with organizations like Humber.” Edward B. Samadhin, Managing Director

About the .NET Bridging Program

Humber offers a 24-week bridging program for internationally trained IT professionals with education and experience in computer programming. This program is designed to provide participants with the advanced concepts, skills and knowledge required to work as .NET Solutions Developers. Ninety eight percent (98%) of our graduates are now employed as .NET Developers, Software Developers and Systems Developers within six months of graduation. The .NET bridging program is generously funded by the Government of Ontario and the Government of Canada. To learn more, visit: http://newtocanada.humber.ca/bridging-programs/net.html