by Prepare For Canada | Jul 23, 2013 | Before Your Arrival into Canada here’s what you need to know, Settling In Canada, Working Success Stories 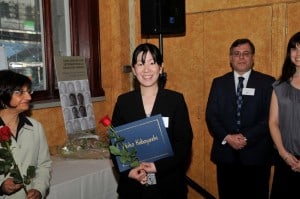 As Canada offers some of the best English courses in the world, in 2005 Akiko Kobayashi came to Toronto to improve her language skills. She planned to study for half a year and then to go back to Japan and pursue her career. Having a Bachelor degree in nursing from Tokai University, Kobayashi worked at a university hospital in Tokyo. Little did she know that 8550 km from Tokyo, in Toronto, she would meet her husband, a Japanese Canadian, and that Canada would become her new home.

When she arrived, Kobayashi found Torontonians open and friendly. “You didn’t really have to speak fluent English,” she says, “everybody was very understanding.” Nevertheless, she made a big effort to master English. For a Japanese, English is hard to learn. The challenge comes from the big difference between the two languages in terms of grammar, syntax and sentence structures (for example, in Japanese the verb comes at the end of the sentence). English pronunciation is also difficult for Japanese speakers – there are many sounds in English that do not exist in Japanese language.

“The first three months in Canada I went to school,” Akiko says. “And after these three months my English wasn’t very good. Then I started working at a restaurant and my English started to improve little by little… very little by little. And because my English was so poor, I didn’t think I could do much in terms of making a living. I was not even thinking of becoming a nurse here. I thought that maybe I should keep doing that job at the restaurant for a long time – and it was disappointing!” 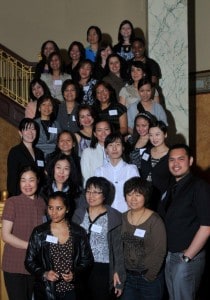 Instead of giving up, Kobayashi decided to study more English and to find a way to make a satisfying and rewarding living in Canada. When she learned about the ESL Volunteer Program that Toronto East General Hospital organized for internationally educated medical professionals, she joined immediately. Participants were given the opportunity to do volunteer work at the hospital and to attend medical English classes.

In this program, Kobayashi met nurses from different parts of the world who had come to Canada and had found themselves in situations similar to hers. Kobayashi felt that she was not alone – this was a turning point in her life in Canada. Her new colleagues were encouraging each other and sharing useful information. From them she heard about CARE Centre for Internationally Educated Nurses. CARE is a bridging program that helps internationally trained nurses find their career paths in Ontario. The Centre offers counselling, ESL classes and help in preparation for the Canadian Registered Nurse Examination (CRNE) and the Canadian Practical Nurse Registration Examination (CPNRE). It also has an Alumni Networking Group.

Joining CARE was a great experience for Kobayashi. “When I went to CARE and I saw how other internationally trained nurses were becoming nurses in Canada, I thought that I might also be able to do it,” she says. So she started her Canadian training and after she passed all the necessary exams she was allowed to work in Canada as a nurse. Grateful to the organisation that helped her, she shared her experience in a multilingual project of CARE that can be watched on CARE’s YouTube channel:

During her studies and work, Kobayashi found out that hospitals in Canada were similar to those in her homeland. Also, there were no significant differences between the responsibilities of the nurses in Japan and in Canada. That meant her Japanese experience and high qualification were adequate and valuable in Canada.

However, even after she passed all her exams in Toronto, it took her a year to find a proper job. She was surprised by the job market in Canada. “There is no such thing in Japan,” she explains. “In Japan [if you are a nurse], you don’t really have to look for a job – there is always a demand for nurses. There you get whatever you want. But not here in Ontario. Here you really have to try hard. And sometimes you don’t get the job you really want. But still, it is a good experience, so I am glad that I have the chance to work at a nursing home now.”

“What most helped me [become a nurse in Canada] was meeting other internationally educated nurses who were having hard time just like me,” Kobayashi says. “We were supporting each other and exchanging information. So networking was the most important thing. Also, CARE Centre helped me a lot. And my family was supportive too. So I was really lucky to receive support from everyone I knew.”