Vivienne Nelson: “You have to adapt”

by Prepare For Canada | Dec 4, 2013 | Before Your Arrival into Canada here’s what you need to know, Working In Canada: A 5-Step Approach, Working Success Stories 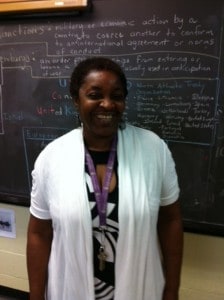 “You are too positive!” said a student to Vivienne Nelson, child and youth worker at a leading Children Mental Health Centre in Toronto. “That was true,” Nelson smiles. “Positivity is part of the survival kit that I brought from my country and I use it a lot. I grew up in an environment where we had to strive to survive. In order to survive it was important to think positively. As for the negative things in life, they could be used best as a learning tool on the way to achieving more positive things. This mindset helped me a lot in Canada.”

In her country, Nelson was a statistician. She had a steady job at the Statistical Institute of Jamaica; however, she loved travelling and was considering a second career in tourism.

She did change careers but in a direction she never expected. After hearing a lot about Canada, Nelson came to visit and liked Canada so much that she decided to make it her new home. Finding a job as a statistician turned out to be hard – to be hired, she needed Canadian work experience which she didn’t have, so she decided to go back to school. Her passion for tourism, however, was replaced by a new interest: child and youth care. This interest was provoked by something she saw on the subway.

“One day I was taking the subway,” she says, “and I saw two – they call them “young adults” here, but to me they were still children – locked in an embrace and kissing. I was shocked! Where I come from, you can’t do that – it would be considered extremely disrespectful toward others to conduct yourself in that manner. You have to hide to do these things. So I said to myself, ‘I have to get into the brain of these children to see what’s going on. And also I need learn more about Canada and the cultural norms here.’” That made Nelson chose her current field – she enrolled in the Child and Youth Worker Program at George Brown College and later went to Ryerson University to study Child and Youth Care.

Meanwhile, she had to work to pay her bills and tuition fees. Her first Canadian job was at a hearing aid factory. She didn’t feel content with the factory work and found a position at an advertising company. This job she liked, but the position was only temporary. Following the advice of her Jamaican friend to become certified in everything she does, Nelson obtained certificates for cleaning houses and babysitting. Soon she opened her own cleaning company. “I would drive alone with my vacuum cleaner and work clothes and all the chemicals and other stuff,” she says. “Then I would rush home, drop the vacuum, change my clothes and be off to school. It was quite tiring, but I knew that I was not going to be a housecleaner or a babysitter forever – these jobs were just stepping stones on the way to what I really wanted.”

Nelson did several other jobs while studying – she worked for an insurance company, for the Jamaican-Canadian Association and at the Jamaican Consulate in Toronto. One of the jobs she liked best was at a residential group home. She was hired as administrative staff, but one day she was asked to do an extra shift. Nelson performed very well, the management liked it and she remained working at the residential home until she got her certificate and diplomas in her chosen field.

Today, Nelson is happy with her job as child and youth worker and enjoys the appreciation of her colleagues and the youths she takes care of. She is confident that she had found the right approach: “Canadian young people used to be different to me [from Jamaican],” she says, “but I have learned how to communicate with them. I’ve learned that no matter whether you deal with youths or with children or with adults, you have to respect them. You have to show respect in order to gain respect. So I respect the young people at the Centre and they respect me. Sometimes, for example, they say, “I know my rights!”, but they don’t really know them. So I calmly and patiently help them understand what their rights are.”

Today, Nelson is happy with her job as child and youth worker and enjoys the appreciation of her colleagues and the youths she takes care of.

Nelson’s advice to newcomers is, “When you come to Canada, think of the future and don’t look back – if you keep thinking about where you came from, what high status you had there and what kind of lifestyle you had, you won’t move forward. Don’t expect Canadian society to change to meet your needs – you are the one who has to change and adapt. You have brought valuable experience and skills from your country, but you have to find out what else is required here and do what is necessary to meet these requirements. And remember, that we all come here for the better, not for the worse. Set your goal and don’t be afraid if you have to use stepping stones to achieve it.”