You have to stand out from other applicants!

by prepareforcanada.com | May 2, 2013 | Before Your Arrival into Canada here’s what you need to know, Working In Canada, Working Success Stories 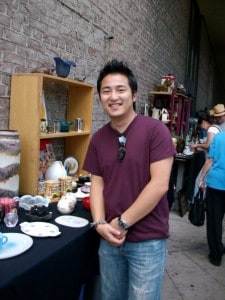 When he first came to Canada, Makoto Uemae had no knowledge of English. He was 11 years old and was brought to Toronto by his father, a protestant priest from Japan. At that time, there were no ESL (English as a Second Language) courses in the area Uemae’s family moved, so the boy was sent to a Canadian school where he couldn’t understand a word of what the teachers were saying and found it challenging to communicate with his schoolmates and make friends. It was a big shock for him but he tried to adapt. “The way to communicate for me [in the beginning] was through drawing,” he says. “I used to draw something in front of my classmates, like Japanese anime characters, and they were impressed – they were excided about it and they got to know more about me. And that was how I got to know more about them.” Also, a teacher introduced Uemae to a Japanese-Canadian girl who spoke a little Japanese, so she used to sit next to him in class and tried to explain him what the teachers were saying. It was two years later when more immigrants moved to the neighbourhood and the first ESL courses were organized, so Uemae had the chance to study English with a teacher..

Despite the stressful experience and the hard times, when a few years later his father was about to return to Japan with the family, Uemae decided to stay on in Canada. He chose to study at the University of Windsor and earned a Bachelor of Commerce (B.Com.) degree. However, he wanted to learn more about his home country and to experience Japanese work environment, so he found an internship opportunity in Tokyo and went to Japan to gain knowledge on how the Japanese conduct business. After he came back to Canada he started looking for a job.

Even with his Canadian education and international experience it wasn’t easy for Uemae to find his first job. He visited many offices and submitted his resume to more than 100 companies. Also, he posted a resume on www.monster.ca . In addition, he used the service of a job agency (which at that time didn’t help him much). All Uemae’s efforts resulted in 10 interviews in three months.

Several financial companies that interviewed Uemae gave him financial statements, income statements and balance sheets to read. After examining these documents Uemae had to guess what industries and what kind of companies they referred to, and he also had to comment on their strengths and weaknesses.

Some of the invitations for interviews Uemae received were from Japanese companies. “I think I was able to get into the industry because I had several skills,” he explains. “First, obviously, my language skills both in English and in Japanese. I knew my strength was there – I was trying to be different from other applicants and this was what made me different. And I emphasized that in my resume. I had background in finance and work experience in Japan. That’s why I got calls from Japanese employers in Canada.”

Two of these companies conducted interviews both in English and in Japanese. Uemae was told to read and write in front of the interviewers. They showed him news articles in Japanese and asked him for his opinion on them. “What they were looking for were not the answers,” Uemae says. “They just wanted to test my language skills. On the other hand, in the English portions of the interviews they wanted to know how I would respond, how logically I thought, they checked my abilities to come up with conclusions.”

Uemae succeeded in these interviews and landed on his first job in Canada – Project Coordinator at a Japanese bearing company. He worked with Canadian clients and was involved in a project for the TTC (Toronto Transit Commission). 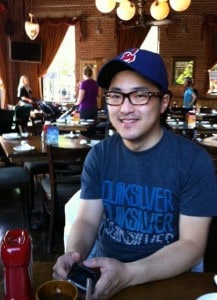 Six years later he decided to move on. This time was easier – it took him less than four months to get a new job and he found it through an agency. “After I gained experience, job agencies became more effective,” he says. “When I first started looking for a job, they were not interested in me, so I had to do everything myself – sending my resumes and personally visiting different companies. But the second time, years later, I had more experience and agencies were helping me more. It was easier for them to introduce me to prospective employers.” During this job search Uemae had to go the agencies’ offices to update his resume and to have language and mathematics tests. The agencies kept all the records and called him several times to inform him of companies that were be interested in his profile. They told him about eight such companies. He had two interviews and was hired as credit analyst at the Toronto office of one of the biggest Japanese banks.

While working, Uemae has always attended courses and programs to brush up his financial skills. “Companies offer many free educational programs to their employees,” he advises. “Especially big financial companies – if you work for them, you can also study and it looks good on your resume.”  Currently, Uemae is involved in the Chartered Financial Analyst (CFA) program offered by the CFA Institute. The CFA designation is required in Canada for most management positions in his field.

Reflecting on his job search, Uemae concludes, “Once you start working, you get to know people in your professional field and it becomes easier to move inside the industry, to find jobs. But the first time – when you are coming from outside or you don’t have much experience – it is the toughest time. You have to keep trying, trying, trying…keep sending your resume.”