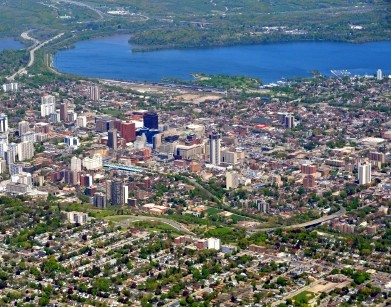 The City of Hamilton is the centre of a densely populated region at the west end of Lake Ontario known as the Golden Horseshoe. The southern part of the city includes the Niagara Escarpment, which Hamiltonians call “the mountain.”

The city itself has more than 500,000 people, and according to Statistics Canada 24% of those come from other countries.

Hamilton is home to the Royal Botanical Gardens, the Canadian Warplane Heritage Museum and the Bruce Trail. It is also the home of both McMaster University and Mohawk College.

The most important economic activity in Ontario is manufacturing, and the Toronto–Hamilton region is the most highly industrialized section of the country. It is known as the steel capital of the country, with 60 percent of Canada’s steel being produced in Hamilton by Stelco and Dofasco.

Hamilton has more than 200 neighbourhoods to choose from, from central Hamilton (the downtown core) to Chinatown to Balfour.

The average temperatures throughout the year are as follows:


The public transportation system within Hamilton relies on a bus system.  For maps, routes and schedules, see the Hamilton Street Railway Company.

The cost of taking public transportation varies depending on the route and distance. See here for a list of fare prices.


For information on driving in Hamilton and how to get a licence, see Driving.

Hamilton is a diverse city and home to many different places of worship where believers gather to practice their beliefs.

The main religions followed in the city include Christianity, Islam, Judaism, Buddhism, Hinduism, and Sikhism.

See here for a list of places of worship in Hamilton.

Hamilton is a medium-sized city in southwest Ontario, located only about 75 kilometers from Toronto. The City of Hamilton includes the former municipalities of Ancaster, Dundas, Flamborough, Glanbrook, Stoney Creek.

Hamilton has a population of 500,000 people, with almost 25 per cent of residents born outside of Canada.

If you are looking for a low-cost place to live, Hamilton is a safe and healthy place to raise your children. It has also beautiful parks, trees and waterfalls, and several world-class educational facilities.

Hamilton is well known for producing steel and for other kinds of heavy manufacturing. That is why it has earned the nickname “Steeltown.” Many people still refer to the city by that name, although the industry and job market in Hamilton are evolving. Hamilton’s major industries today include manufacturing, bioscience and medical, and agriculture.

As well, the fact that the city is situated in the cluster of highways, train lines and airports that service southern Ontario, makes it easily reachable by many different means.

Finding a home in the Hamilton area shouldn’t be too difficult, as there are plenty of options in its many neighbourhoods. Average rent for a two-bedroom apartment is $860 per month; average home sale prices are $369,292, much more affordable than living in Toronto.

There are six hospitals in Hamilton with about 1500 beds.
Each hospital is a centre of excellence for a particular specialty, providing a state-of-the-art healthcare system to Hamiltonians. All hospitals are teaching hospitals too.
The internationally acclaimed healthcare research conducted at McMaster University ensures that the very best in patient care is available to Hamilton and the region.

For a list of hospitals in Hamilton, see here.

Hamilton’s McMaster University was named Canada’s most innovative ‘medical doctoral’ university eight times in the last 11 years in Maclean’s annual ranking of universities. The university’s student-centred, problem-based, interdisciplinary approach to learning has been adopted by many universities around the world. Established in 1887, the university offers programs in health care, engineering, business, social sciences, science, and humanities research and education.

Hamilton also has many private colleges where residents can learn a new trade or skill to be better prepared when entering the workforce. Examples of schools are Trios College, CDI College, National Academy of Health & Business, and Academy of Learning College.

For a listing of educational institutions and school boards in Hamilton, see here.

Hamilton is a big sports city and its residents are famous for their love of just about every professional and amateur sport going.

The big number of hockey arenas, pools, soccer fields, baseball diamonds and even cricket pitches throughout the city are a proof that the city’s committed to promoting sport.

Hamilton offers many other pastimes as well, including golfing, fencing, mountain biking, swimming, mountaineering, curling and martial arts. The city is also home to the Canadian Football Hall of Fame.