Public Transit in Vancouver | Get Around with Ease

Vancouver’s public transit system is managed by TransLink, the company that looks over Metro Vancouver’s transportation network. Vancouver Metropolitan Area, or simply Metro Vancouver is a group of municipalities that include the city of Vancouver and its surrounding cities such as Burnaby, Surrey, and Richmond.

Let’s take a deeper look at each of these systems below.

SkyTrain uses automated trains that run on both underground and elevated tracks throughout the city. Since it mostly runs on elevated tracks, the transit system was named SkyTrain.

Buses are the most common way of using public transit in Canadian cities. The SkyTrain system along with buses is enough to serve most of your transportation needs around the Metro Vancouver area. Buses run through neighbourhoods at frequent timings from 5:00 AM to 1:00 AM.

Buses connect different parts of the city to major destinations and SkyTrain stations. You can get almost anywhere in Metro Vancouver by using buses. However, the longer the distance, the more buses you will probably have to change, resulting in longer travel times. If you plan on using public transit often, you can open Google Maps and look at the best routes to get to your destination. Oftentimes, the best way to get to your destination could be by using both SkyTrain and the bus.

Vancouver’s SeaBus is a ferry service that connects the city of Vancouver to North Vancouver by crossing the Burrard Inlet. The SeaBus system operates from 6 AM to 1 AM from Monday to Saturday and from 8 AM to 11 PM on Sundays and Holidays. 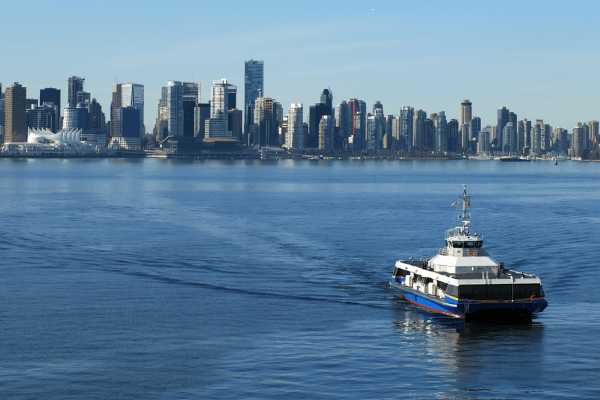 Throughout the day, you can board a passenger vessel every 15 minutes. However, on Sundays and evenings of the rest of the week, a vessel will only come every 30 minutes. This is because, during the day, 2 passenger vessels are in service while during the evenings and Sundays, only 1 vessel is getting passengers across the Inlet.

Metro Vancouver is divided into 3 fare zones when it comes to its public transit system. If you are using either the SkyTrain or the SeaBus, the amount you pay is based on how many fare zones you cross. However, if you are on a bus, you will be charged for a one-zone ride no matter how many zones you cross.

If you are travelling on weekends/holidays or after 6:30 PM on weekdays, you will also be charged a one-zone fare. This applies even to SkyTrain and SeaBus fares. It is important to know how many zones you are going to cross on your trip and when so you know how much you will be needing to pay.

Fares zones divide metro Vancouver into 3 zones. If you are using SkyTrain or SeaBus, you need to keep these in mind because crossing one or more of these zones will require you to pay more for your ride. Keep in mind that the West Coast Express has completely different zones as it goes outside the Metro Vancouver region.

The fares listed below are for bus, SkyTrain, and SeaBus journey and are for each fare zone in Metro Vancouver:

Here are the discounted concession fares for each fare zone:

Here, you will find TransLink’s guide to fare zones and the full fare pricing table. You will also find all your options for paying fares on buses, SkyTrain and SeaBus.

So what do these zones mean for you as a traveller? If you travel from Waterfront Station (Downtown Vancouver) to Mission City Station, you would have to pay a full 5-zone fare. This is because there are 5 zones between Waterfront and Mission City. However, if you were to travel from Mission City to Pitt Meadows, you would only have to pay a 2-zone fare. This is because you will have to travel through 2 zones to get to Pitt Meadows.

In general, you will have to pay somewhere between $6 – $13 for a regular one-way ticket. The price would drop to around $4 – $8 for a concession ticket. Remember, the more zones you cross, the more your ticket will cost.

Compass cards are the most convenient way to pay for fares in Metro Vancouver. Not only are they easy to use but they will also save you money. A Compass card is a fare card you can use to pay fares for buses, SkyTrain, SeaBus, and the West Coast Express.

If you plan on using the public transportation system a lot, you should consider getting a Compass card. Over time, paying by cash will really start to add up to your cost of living.

How to Use Your Compass Card

Where to Buy a Public Transit Compass Card

There are many places where you can buy and reload your Compass Card. The easiest way is to get one online. Visit this site to purchase a Compass card online. Once you have paid for the card, it will be mailed to your location in Canada.

You can return the compass card and collect your $6 fee once you are done using the card. This is especially useful for visitors in Metro Vancouver as they will not have to worry about the $6 fee to purchase the card.

To learn more about Compass cards, visit TransLink’s guide to Compass Cards. If you want to learn how to use your Compass card, click here.

For more information, tools, and free webinars about living in Canada visit our Settling in Canada resource page. We’ll help you to settle in Canada successfully!

My name is Zain Usmani and I am a freelance content writer who currently resides in Mississauga, Ontario. I immigrated from Pakistan to Canada 5 years ago and have lived in many cities ever since. I have lived in Calgary AB, Edmonton AB, Regina SK, London ON, and Mississauga ON, while visiting over 40 Canadian cities and towns. I have a great passion for writing and I love helping people through it.