by prepareforcanada.com | Feb 20, 2013 | After you Arrive, Working In Canada, Working Success Stories 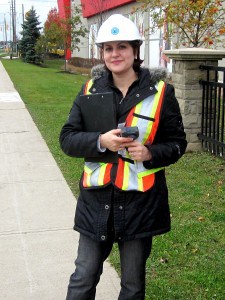 It took only five months for Iranian engineer R. Abri to find a job that perfectly matched her education and professional background after moving to Toronto in 2010.

But, in those first five months, Abri experienced plenty of culture shock, similar to many other immigrants after arriving. “In our countries,” she explains, “some of us have held high positions, management positions. We could have worked there for 10 or 15 years, but when we come here we realize that we don’t have the same status — nobody here knows you as a manager, nobody knows you as an engineer. You are just yourself. And it is shocking.”

Abri also found out that, in Canada, internationally trained engineers cannot call themselves “engineers” and cannot sign any documents as such if they don’t have the P.Eng. (professional engineer) designation, which in Ontario is conferred by the Professional Engineers of Ontario. To obtain a P.Eng. designation, an immigrant has to apply for it, have their degrees recognized and meet all the requirements. Among these requirements is one year of Canadian engineering experience, which can be gained by working under the supervision of a certified engineer.

Abri also realized that, in order to find a job, she had to learn about Canadian job-searching techniques. “When you come to Canada,” she says, “you think that if you apply for jobs, you will find a position very soon; however, this is not the case. Because in every country resume writing and job-finding strategies are different, you need guidance.”

Fortunately, she learned that in Toronto there are many government-funded courses and workshops that help immigrants. After a little internet-based research, she came across the Occupation-Specific Language Training for Engineers at Humber College. To enrol in this course, students are required to have Canadian Language Benchmark (CBL) higher than 6. Abri took the free test at the YMCA, passed and signed up for the Humber College program.

Abri is grateful for finding the Occupation-Specific Language Training program because it not only gave her advanced language training in her field, it also gave her the chance to meet other engineers in situations similar to hers. It was a great opportunity to exchange information about the P.Eng. designation, share experiences and make friends.

More than language, the course also helps students integrate into the Canadian work environment. “For example, I learned how important a handshake is in Canada,” Abri says. “It shouldn’t be very firm or very loose. When you go to an interview, your handshake is one of the first impressions you make. It shows employers if you are self-confident or not.”

Also, participants are taught how to act in professional meetings, how to communicate with clients and talk over the phone, even how to dress for work.

After completing the course, Abri enrolled in the Engineering Software Skills Enhancement program at Humber College. This government-sponsored program is designed to provide internationally trained engineers with the latest technical and software skills required by Canadian employers.

Immigrants are also given valuable assistance in their job search, including learning how to use cold calling and ask for informational interviews. “At first I thought cold calling was very hard,” Abri remembers. “You should call a person you have never met in your life and ask him or her for a 30-minute meeting.”

Abri got up the courage to call a manager at a large consultant company. She was lucky — he turned out to be a good-hearted person who talked to her for an hour, provided her with a lot of information and gave her the telephone numbers of some people she could contact about jobs. He told her, “My daughter is looking for a job, too, so if I help you, maybe somebody else will help my daughter.”

Abri was very encouraged. “After hearing many bad comments about companies here,” she says, “after listening to so many negative things — that you cannot find a job in your field, that people will not accept you, things like that — it was very good for me to listen to this person.”

Abri didn’t use the contact list that manager gave her because she found her first job through another cold call. She phoned the manager of a company she was interested in, introduced herself and asked him for an informational interview. She explained that, as a newcomer from Iran, she wanted to learn about Canadian engineering office environments. The manager said he was too busy and Abri thought she would never hear from him again; however, in two weeks he called and invited her to his office. “I never thought that this was going to be my job interview,” Abri says. “I had my resume and my previous company catalogue with me and when I went there I felt very self-confident. I explained what expertise I had, what programs I knew … things like this. The president of the company was in the same room and we talked in a very friendly way. I never knew that they wanted to hire me. But, two hours after the meeting, the president of the company called me and I received my first job offer.”

Meanwhile, Abri applied for her P.Eng. designation. She fulfilled all the requirements and received her licence in May 2012.

Based on her experience, Abri advises immigrants that networking and cold calling are very useful strategies for finding jobs. “Because if you don’t introduce yourself,” she says, “nobody would know how talented and knowledgeable you are.” To make a cold call, however, it is very important to choose the right time. “In the job-searching workshops,” Abri explains, “I was told that in the beginning of the week people are too busy and they don’t have time to talk to you. But after 4 p.m. on Thursdays or Fridays they usually have more time and can answer you. And if you are fortunate, you can have your informational interview.

“I am not saying that everyone will find a job in that way,” Abri says, “but it is worth trying. The most important thing is to be very positive. And you should never, never listen to negative people who tell you that you can’t find jobs, that you have to become a taxi driver or a cashier. You have to pursue your goal.”