Prince George is the “Northern Capital” of British Columbia; it’s the largest city in the northern area of the province and has a population of about 80,000.

Situated at the confluence of the Fraser and Nechako Rivers, and the crossroads of Highway 16 and Highway 97, Prince George has an important role in British Columbia’s economy and culture and acts as its service and supply hub.

Many highly skilled new immigrants choose Prince George as their home in Canada, because of its safe and embracing community, and easy lifestyle.

Prince George has a humid continental climate: four complete seasons – lots of sun between May and September and lots of snow between November and March. The average January temperature is −10 °C, and there’s an average of 38 days from December to February where the high reaches or surpasses freezing. Summer days are warm, with a July high of 22°C, but lows are often cool, with monthly lows averaging below 10 °C. The transitions between winter and summer, however, are short. There is some precipitation year-round, but February through April is the driest period. Snow averages 216 centimetres each year. 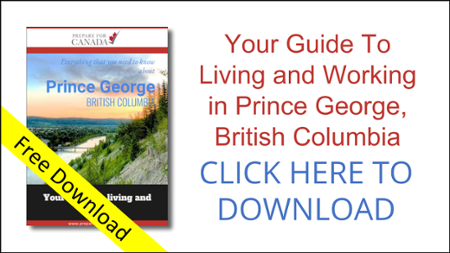 The primary air connection to the rest of the world is provided by multiple daily flights out of YXS to Vancouver on Air Canada and Westjet.

If you live in one of Prince George’s residential areas, your maximum commute to downtown will be about 15 minutes.

For information on driving in British Columbia and how to get a licence, see Driving.

Prince George is home to numerous cultural associations for immigrants from around the world and you will find Catholic and Protestant churches, Sikh Temples and an Islamic Center in the city. To find out about different places of worship in Prince George, click here.

Nowadays, the service industries dominate Prince George’s economy. Previously, the forestry sector was the dominant one.

The city’s education sector also contributes about $800 million to the local economy every year.

The area is witnessing sawmill closures and the creation of ‘supermills’. More closures are expected to follow, and some see mining exploration and development as the future of Prince George.

The city is a staging centre for mining and prospecting, and a major regional transportation, trade and government hub. Several major retailers are increasing their presence in the Prince George region.

Prince George offers a high standard of living for you and your family. You can check out the average cost of buying a home in Prince George here.

Use the B.C. Government’s Cost of Living Calculator to find out more about costs in Prince George.

Prince George has 40 elementary and eight secondary schools, as well as eight private schools, and many options for early childhood care including child care centers and home providers.

It is also home to a public francophone elementary and secondary school, both of which are part of School District 93 Conseil scolaire francophone, a province-wide francophone school district.

The Settlement Workers in Schools (SWIS) is a free program to assist the children of newcomers in the public school system, and provides services in Chinese, English, Hindi, Punjabi and Urdu.

Post-secondary education choices include the regional College of New Caledonia.

The University of Northern British Columbia’s hilltop campus overlooks the City of Prince George and offers spectacular views of the Rocky Mountains to the east.

Prince George is a gateway city to the Northern British Columbia and an excellent starting point for exploring the region. It offers a unique opportunity to enjoy the amenities of a city, while finding a variety of wilderness opportunities just minutes away.

Hiking, camping, fishing, golfing and cross-country skiing are just a few outdoor activities that Prince George has to offer. Dog-sled racing is an exciting Northern BC experience and has been a popular winter pastime in many northern communities. Other winter sports include skating, curling, downhill skiing, and snowmobiling.

You can find more rustic attractions outside the city, such as exploring pioneer history and agricultural ways of life, including the heritage sites Huble Homestead and Noah’s Arc.