Fort McMurray, Alberta, is best known today for its association with the oil sands industry. It is the top employer in the region with many available jobs in oil sands and supporting industries. Although not officially a city, “Fort Mac” is considered to be the heart of one of Canada’s major oil production hub.

Fort McMurray, formerly a city, became an urban service area when it amalgamated with Improvement District No. 143 in April 1995. With this amalgamation, the Regional Municipality of Wood Buffalo was created.

Fort McMurray is located 435 kilometres northeast of Edmonton and about 60 kilometres west of the Saskatchewan border. Nestled in the boreal forest at the confluence of the Athabasca River and the Clearwater River, it is the largest community in the Regional Municipality of Wood Buffalo.

Fort McMurray has a diverse and multicultural community and attracts people from all corners of Canada and the world. 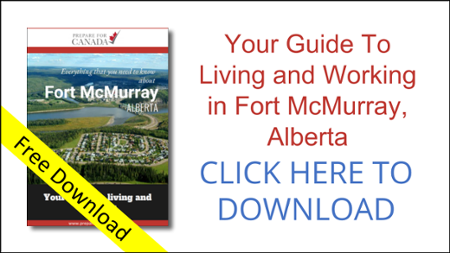 There are four school districts in Fort McMurray, as well as five colleges and universities. And there are many opportunities to get training or upgrade your skills in or near the city.

There are 24 elementary and secondary schools within the public school districts in Fort McMurray and six in the rural areas of Wood Buffalo.

With a humid continental climate and no dry season, Fort McMurray has long, very cold winters and warm, short summers.

16 regular bus routes operate daily with two additional weekday rush hour routes to the main industrial areas and a special Saturday service for people in Saprae Creek. The system has reduced weekend service and does not operate at all on most holidays.

As well, various oil companies operate their own corporate and charter flights.

Highway 63 is the only highway between Fort McMurray and Edmonton. Because of the demands of the oil sands industry, this highway boasts some of the highest tonnage per kilometer in Canada, and the largest and heaviest loads that trucks have ever carried.

Fort McMurray can also be accessed from Lac La Biche through Highway 881. The city is also served by Highway 69, which is a short spur off of Highway 63 that connects Fort McMurray with its airport and a few rural residential developments to the southeast.

The Fort McMurray RCMP Detachment consists of both Provincial and Municipal civilian staff that provide administrative services to the RCMP.

In emergency call 9-1-1 immediately. An emergency is any situation that requires immediate assistance from the police, the fire department or an ambulance. If the situation doesn’t require immediate attention, call 780-788-4000 (Complaint); 780-788-4040 (Admin).

Fort McMurray is home to a wide variety of religious beliefs and worship groups. To find out about different places of worship in Fort McMurray, click here.

Fort McMurray is located near the Athabasca Oil Sands and is considered the heart of one of Alberta’s (and Canada’s) hubs of oil production. Besides the oil sands, the city’s economy includes natural gas and oil pipelines, forestry and tourism. Oil sand companies include Syncrude, Suncor Energy, CNRL, Shell, and Nexen.

It is expected that the oilsands are going to be the economic engine for Canada for the next 25 to 30 years.

Because of the booming economy, housing prices and rents are far higher in Fort McMurray than normally expected in such a remote area. Fort McMurray had the highest prices in Alberta in 2006.

As well, the growth of the economy and population in Fort McMurray has put an enormous strain on public infrastructure, including roads, bridges, schools, the airport, the water treatment plant, sewer system, recreational facilities and hospitals.

In order to ease the pressure, the provincial and municipal governments are planning to build numerous public sector infrastructure projects to cope with Fort McMurray’s rapid growth.

Finding a home in Fort McMurray shouldn’t be too difficult, however, rents are considered to be the highest in Canada and are continuing to rise, because of the continued flow of immigrants and workers coming to the region to work in the oilsands sector.

Average rent for a two-bedroom apartment in Fort McMurray is $2,229 per month; average home sale price is $769,153 for a single family unit.

To find rental apartments, you can check your local newspaper classifieds or online sites like Craigslist.

As in other parts of Alberta, comprehensive health care services are available in Fort McMurray. Health care in the Wood Buffalo region is coordinated and delivered through Alberta Health Services, Northern Region, part of the Province’s health care system.

Many health services here are free for people who are covered by the Alberta Health Care Insurance Plan (AHCIP). People who do not have an AHCIP card must pay for health services. As a newcomer to Alberta, you can apply for the AHCIP three months before leaving your country of origin. If you are moving to Alberta from another province or territory in Canada, you can use Alberta health services until you are eligible for health insurance in the province.

The urban area of Fort McMurray offers a variety of community health and specialist services, in addition to a hospital and two medical centres. You can access primary care quickly here, as many Fort McMurray family doctors are accepting new patients. For some speciality services, however, you may need to travel to Edmonton.

Though more famous for its employment opportunities, Fort McMurray is a unique and vibrant community, with people coming from all over the world to work, play and raise their families here.

There is always so much to do in Fort McMurray and the Wood Buffalo region:

Click here for a list of upcoming events and recreation facilities in the Regional Municipality of Wood Buffalo.