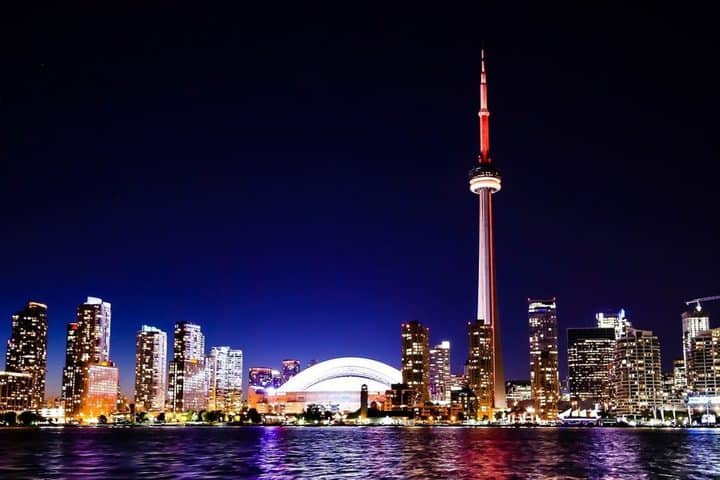 Toronto is considered the financial capital of Canada. About 40 percent of Canada’s business headquarters are located here, including the country’s largest banks. Toronto is the capital of the Province of Ontario and is located on the north shore of Lake Ontario.

Toronto has a population of 2.8 million (2016). It is the most populated city in Canada with a density of 4,334.2 people per square kilometre. The population of the Greater Toronto Area is much larger at 5.9 million.

The GTA includes not only the City of Toronto, but also four regional municipalities surrounding it:

Known as the ‘city of neighbourhoods’ Toronto is conveniently divided into regions. Toronto of the past was just the central downtown and close surrounding area. But in 1998, the City of Toronto was revised and expanded and now has more than a whopping 240 neighbourhoods, making this great city…even greater.

Who made it out for Nuit Blanche on Saturday night? We loved this one at @AgaKhanMuseum, first-time participants this year. To see more, check out @nuitblancheTO or #nbTO16. #SeeTorontoNow #SensoryCity 📷: @agreatcapture

The city is also a mosaic of languages with more than 150 languages spoken every day in the city. Just over 30 per cent of Toronto residents speak a language other than English or French at home. Hundreds of ethno-cultural organizations – including professional associations and community centres – operate in the city.

The city is ranked as the safest large metropolitan area in North America by Places Rated Almanac.

Toronto’s remarkably diverse economy creates unlimited business opportunities. Toronto-based businesses export over $70 billion in goods and services to every corner of the globe with retail sales of $62 billion annually.

The business sector of the city has grown and expanded significantly, putting Toronto on the map for the business world. The city’s economy relies on innovation and the development of ideas to create economic wealth.

Fun fact for #Toronto architecture buffs: each pane of glass on the Royal Bank Plaza has a layer of 24k gold that helps make it both energy efficient and awesome to look at! Photo: swisscan. #seetorontonow #TravelToronto #TorontoTheGood #TorontoWeekends #CityBreak

The city is also home to 9 of Canada’s 10 largest law practices, 9 of the top 10 accounting firms and all 10 top human resources and benefits firms.

Establishing a business in Toronto is an efficient and inexpensive process regulated by either the federal or provincial government. When establishing your business in the city, you need to determine whether to incorporate provincially or federally, and which licences, permits and insurance you to obtain.

Approximately 35% of jobs are located in downtown Toronto across all sectors including Finance, Technology, Retail, and Service. As the city has a thriving tourism industry, there are plenty of jobs in hospitality and customer service.

Wages in Toronto are higher than anywhere else in Canada. According to PayScale, the average salary in Toronto in 2019 is $59,031. It’s also an expensive city, so you’ll have to budget wisely.

Finding a home in the Toronto area shouldn’t be too difficult, as there are plenty of options, both in downtown Toronto and the surrounding areas like Mississauga and Markham. But each area presents slightly different benefits and drawbacks.

While many newcomers want to live downtown for convenience and lifestyle, it will also feature higher home purchase and rental prices. Average rent for a two-bedroom apartment in Toronto is $1,123 per month; average home sale prices are $516,787.

Living a little further from the downtown core means you’ll likely be able to afford a larger home in quieter setting, but if you work downtown, your daily commute will be longer. The choice is yours.

To purchase a home, contact a realtor in the area who will guide you through the home-buying process.

Toronto has a one of the highest standards in the world for health care and medical services. The city benefits from an extensive medical community, world-class medical institutions and research facilities.

Toronto residents are eligible for Ontario Health Insurance Plan (OHIP), which is a provincially funded medical plan that provides free, essential hospital and medical care to all Ontario residents.

Applying for the OHIP card should be one of your first tasks after arrival, as it can take up to three months from the date you applied to receive coverage. In the meantime, consider buying travel insurance that includes health coverage from a private company, especially if you have young children.

See here for a list of Toronto hospitals and here for health care options in Ontario.

Education in Toronto is mandatory and every child between the ages of five and 16 is required to attend school. The public and separate schools run on the same parameters with the school age of a child being defined by the year the child was born.

Although the age difference of a student may differ by almost a year if one is born in January versus a student born in December the child is considered the same age if the calendar year is the same.

As most other Canadian cities there are both public and private schools providing academic learning opportunities for Toronto residents.Students can attend schools in either board depending on which one their parents or guardians choose to support with their tax dollars.

Ask at schools in your neighbourhood or contact the local school board for guidance.

Toronto has also an impressive range of post-secondary educational facilities which include three universities and five colleges offering training in virtually every profession and skill.

Toronto is a Canadian leader in number of post-secondary schools and graduates with more than 15,000 medical/ biotech researchers, two top-ranked MBA schools as well as excellent programs in engineering, computer sciences and multi-media.

To find a college or a university in Toronto, visit www.tcu.gov.on.ca/eng/

While no one moves to Toronto for its weather, as it experiences very warm summers and long, cold winters, it is still considered moderate for Canada because of its southern location. The area experiences four distinct seasons:

•    Spring: is a rainy season in most of Toronto. Average temperature is about 12°C in March, April and early May.
•    Summer: technically begins on June 21, but July and August are the warmest and most humid months of summer, with daytime temperatures usually above 20°C and often rise above 30°C.
•   Fall: the weather cools down and rain often makes an appearance. Average temperatures are about 10°C to 12°C.
•   Winter: it’s cold in winter and it snows often, with snow staying on the ground for weeks or months at a time. From December to February, the temperature is usually below 0°C, day and night. Temperatures can drop below -25°C. 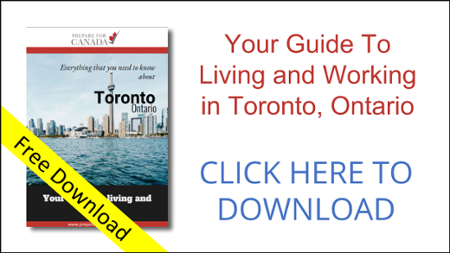 The City of Toronto and the other cities and towns that make up the Greater Toronto Area are easily connected by public transportation, including the subway/Rapid Transit (RT), buses and streetcars, all governed by the Toronto Transit Commission (for maps, routes and schedules, see www.ttc.ca).

The cost of taking public transportation varies depending on the method and distance.

For information on driving in Toronto and how to get a licence, see Driving.

Being a diverse city, there are many different places of worship in Toronto where you can connect with your religious beliefs. Though all Toronto neighbourhoods have sacred spaces for believers to gather, certain city regions have a larger number of religious communities than others.

Toronto locals work hard, but they also know the importance of recreational programs which offer self growth, fun, and leisure.
There are many different kinds of recreation in Toronto. Some of the best ways to figure out local activities and programs is to visit your local community centre.

The main sections of recreation in Toronto can be divided into the following main categories;

Though many great Toronto recreation programs are low cost or free, sometimes there is a program or admissions fee for certain programs. It is wise to research the program of interest before applying.

You can also find awesome recreation programs at places such as YMCA.