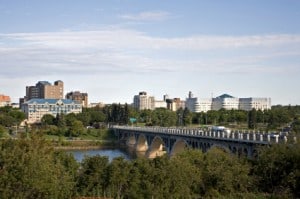 Saskatoon is a great multicultural city in which to live, work, study and play.

Known as the City of Bridges, Saskatoon is the largest city in the province of Saskatchewan, with a population of over 260,000 (2011 census). Saskatoon is located on the banks of South Saskatchewan River, in the heart of the Canadian Prairies. Residents of the city are called Saskatonians.

Saskatoon is the location of the Northwest Rebellion of 1885, and the city’s rich culture has largely been preserved by the Aboriginal people who make up nearly 10 per cent of the city’s population.

The city offers excellent employment and entrepreneurship opportunities in mining and energy, biotechnology and life sciences, manufacturing and transportation.  Educational opportunities are plentiful, with easy access to many elementary and high schools, technical colleges and the University of Saskatchewan. Saskatoon has three major hospitals including a teaching hospital.

Saskatoon is one of the sunniest cities in Canada – with an average of 2,381 hours of sunshine per year it truly does shine. On the other hand, compared with other Canadian cities, Saskatoon’s rainfall rate is quite low. The city receives an average annual rainfall of 265 millimetres and an average annual snowfall of 97 centimetres. May, June and July are the rainiest months, while November, December and January tend to be the snowiest.

Saskatoon is in a humid continental climatic zone and experiences four distinct seasons, with warm summers and very cold winters.

Thunderstorms are common in the summer months and can be severe with torrential rain, hail, high winds, intense lightning and, on rare occasion, tornadoes. In summer, temperatures range as high as 30°C on the warmest summer days, while winter can see the temperature dip as low as -30°C.

Saskatoon has many options for getting around the city or travelling to other destinations. Depending upon where you are, your destination may even be within easy walking distance!

Saskatoon Transit operates a fleet of buses with numerous routes to get you where you need to go in the city. Over 100 of these buses have bicycle racks on the front.

For those who have mobility issues and cannot use regular transit buses Access Transit provides lift-equipped buses and cabs within the city limits.

By air, Saskatoon is served by the John G. Diefenbaker International Airport through which you can reach most major Canadian, U.S. and international destinations with one-stop connecting flights in several North American airline hubs. If you prefer train service, VIA Rail Canada operates a train station approximately 8 kilometres from Saskatoon’s downtown.

Saskatoon is home to people of many different cultural backgrounds; you will find a number of places of worship, representing a large variety of spiritual and religious beliefs. Immigrant-serving centres should be able to give you more information on places of worship. You may also search the Yellow Pages in the telephone book.

It is recognized as one of the best places to live in Canada, successfully combining big city amenities with small town hospitality.

Saskatoon is a fast growing, friendly city. Over the years, it has welcomed people from all over Canada and the world. According to the 2011 census, the city had a population of over 234,000 people.

According to the 2006 census, 18% of Saskatoon’s population consists of youths under the age of 15, while those over 65 constitute 13% of the population. Saskatoon residents have a median age of 35.5 years, four years younger than the national average.

According to the 2001 census, 190,120 or 85.4% of the city’s population were white Canadians, 19,900 or 8.9% were Aboriginals (the second highest percentage of First Nations population among major Canadian cities), and less than 5% belonging to other visible minorities such as Chinese and South Asians.

The Newcomer Information Centre (NIC) is an important first stop for any newcomer to Saskatoon. You can find information on housing, schools, and where to shop, as well as make an appointment for a language assessment. NIC staff can refer you to other settlement services. You can also use a computer, make free local phone calls, and have documents photocopied.

Saskatoon, also known as the “Hub City” refers to its favourable central location in the province of Saskatchewan.

Saskatoon has a largely diversified economy with a wide range of products and services in demand from around the world. With steadily growing infrastructure, natural resources, research and development, and a well educated workforce, it is also Canada’s fastest growing city according to Statistics Canada.

The economy of the city has been associated with potash, oil and agriculture, mainly wheat. Nearly two-thirds of the world’s recoverable potash reserves are located in the Saskatoon region.

The city is also the new home of BHP Billiton’s Diamonds and Specialty Products business unit.

Finding a home in Saskatoon shouldn’t be too difficult, as the city offers many options – condos, town houses or single family homes – to suit your tastes and budget.

Most people choose to rent furnished or unfurnished apartments or houses when they first arrive.

If you want to buy a house, Saskatoon also has a strong real estate market, with many houses and condominiums for sale. Housing prices in the region have increased in recent years; however, home ownership is still attainable for most people.

A great place to start your search is Realtor.ca. You can search for homes by price, style, neighbourhood, and number of bedrooms, among other variables.

Saskatchewan is the birthplace of medicare, the publicly-funded, publicly-administered health care system in Canada. You must have a Saskatchewan Health Card to receive health care at no direct cost to you.

If you need immediate medical care – broken bone, chest pains, difficulty breathing, etc. – you can access any emergency wards; please check each hospital’s website to learn what hours the emergency wards are open.

If you need medical care, but it is not an emergency, there are a number of walk-in clinics in Saskatoon, which you can find by searching the Saskatoon Yellow pages. You do not need to have a family doctor to use a walk-in clinic.

While you are not required to have a regular family doctor, it is of great benefit to be able to consistently visit a doctor who is familiar with your and your family’s health. To find a family doctor in Saskatoon, visit the Saskatoon Health Region’s website, which provides a list of doctors who are currently accepting new patients. If you don’t have a family doctor yet, but need to see a doctor, there are a number of walk-in clinics that you can go to.

Many employers in Saskatchewan provide private health insurance to cover additional health needs not covered by the province’s health benefits, such as dental, eye care and prescription drugs. If you don’t have coverage with your employer, or you’d simply like to fill in any coverage gaps, you can purchase minsurance with an insurance provider.

There are also a number of private schools, where attending students pay tuition.

In the Post-Secondary field, Saskatoon has two publically funded institutions for those who want to pursue education beyond a Grade 12 level: University of Saskatchewan and SIAST (Saskatchewan Institute of Applied Science and Technology), Kelsey Campus .

Saskatoon is also home to a number of private career colleges, specializing in such areas as office administration, massage therapy, hair styling and aesthetics, and many others.

If you are immigrating to Saskatoon, you have many classes available to help you improve your English, regardless of your current level!

This cosmopolitan city is proud of its multicultural heritage, and residents are active throughout the year and enjoy all four seasons with festivals, special events and a rich offering of the arts, culture, sports and recreation.

Known as Bridge City, Saskatoon is the largest city in Saskatchewan and the location of the Northwest Rebellion of 1885. The city’s rich culture has largely been preserved by the Aboriginal people and through sites like Wanuskewin Heritage Park, Batoche National Heritage Site and Fort Carlton Provincial Park.

Saskatoon is also home to a lively arts and entertainment community, along with scores of festivals and events, performing arts, museums and galleries. Art enthusiasts will love the permanent collection of over 500 works at the Mendel Art Gallery that houses. Then there’s TCU Place in Midtown Plaza, which plays host to numerous concerts and theatrical performances throughout the year.

For a daytrip, head to Beaver Creek Conservation Area. This large expanse of preserved land is an accredited wildlife site with many nature trails worth exploring. Blackstrap and Pike Lake Provincial Parks are also available for all sorts of activities, such as camping, swimming and picnicking.