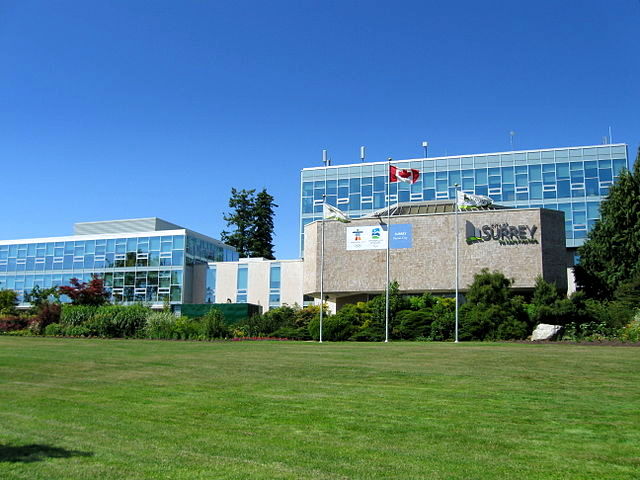 Surrey is the second-largest city by population in British Columbia after Vancouver.  It is located only 23 kilometres from Vancouver Centre and living in Surrey offers more affordable housing than the B.C. capital.

Therefore, many people choose to live in Surrey and commute to Vancouver for work if necessary. Residents of Surrey enjoy beautiful urban forests and clean beaches, golf courses, and great eco-tourism opportunities. Surrey is often called ‘the City of Parks’ because of its 600 parks and 277 hiking/biking trails and walkways.

Surrey has a moderate, inter-coastal Pacific-Northwest climate that can be appealing to those who wouldn’t like Alberta’s cold winters or Toronto’s hot and humid summers. Winters in Surrey are mild with an average temperature of 5 degrees C.  Snow is rare; however, there can be many rainy and gloomy days, even rainy weeks in a row. Springs are also wet. Summers are sunny with an average temperature of 22 degrees C, and autumns are cool. Surrey enjoys about 1848.3 sunshine hours per year (average 5 hours per day).

SkyTrain Expo Line connects Surrey to Vancouver. Buses are the main way of public transport in Surrey. Currently, there are 1332 bus stops. For bus timetables, maps and fares click here.

From Monday to 6:30 on Friday the fare system is divided into three zones and passengers pay according to the number of zones they travel in. From Monday to Friday after 6:30 and during the weekend and holidays commuters pay one fare no matter how many zones they cross. If you choose to pay the fare when getting on a bus, you need to have exact change, because the driver does not accept bills and do not give change. Make sure you receive Proof of Payment/Transfers. Transfers are valid for 90 minutes. If you travel often, you can buy a Monthly FareCard.

Driving and parking in all City of Surrey streets are regulated by the Highway and Traffic By-law, 1997, No. 13007. In large part, the by-law reflects the Province of British Columbia Motor Vehicle Act.
For maps and directions in Surrey visit http://www.surrey.ca/city-services/654.aspx.

As part of its efforts to increase awareness of high collision areas, the Surrey RCMP provides traffic safety maps, indicating the top collision locations in the city of Surrey.

Christianity is the predominant religion in Surrey. About 50% of the population in 2001 self-identified as Christians – Protestant, Catholic, Orthodox, or other Christians. To find a Christian church in Surrey, click here.

The second-largest religious group, 16.3%, is the Sikh. Every year on April 13, the Sikh community organizes a big celebration of Vaisakhi. The celebration often includes a nagar kirtan (parade). Surrey’s Guru Nana Sikh Gurdwara is one of the leading Sikh Temples in Canada.

To find a mosque in Surrey click here: To find synagogues in Surrey, you can contact the Center for Judaism.

With a population of 472,000, Surrey is the second-largest city in British Columbia. Between 2001 and 2011 the city’s population has increased by over 100,000 residents and it continues growing.

The last Census (from 2006) showed that among immigrants 38.3 % came from South Asia, 18.4% from Europe, 14.1% from Southeast Asia, and 12% from East Asia.  Among Surrey’s immigrants, the most common countries of birth were India (35%), the United Kingdom (8%), the Philippines (7.4%), and Fiji (5.7%). Place of birth characteristics for the immigrant population varies considerably from one Surrey community to another. For example, 62% of immigrants in Newton came from South Asia, whereas in South Surrey only 5.0 % came from that region of the world. In South Surrey and Cloverdale, most immigrants were from Europe.

As in other parts of British Columbia, Surrey’s population is aging. While the number of people under the age of 30 decreases, there is a steady rise in the seniors’ population and the population between 30 and 64 years old. The age distribution varies in different communities of Surrey. The neighbourhoods with more immigrants have more young people.

The Pacific Rim location of Surrey combined with its fast-growing and multicultural population gives the city great business opportunities for international trade with Asia and the United States. The three largest occupational categories (according to the National Occupation Classification used by Statistics Canada) in Surrey are:

The strongest growth was experienced in health occupation (+29.1%). This is due to the increasing need for medical assistance for Surrey’s aging population.

Due to population growth, Surrey became one of the best places in B.C. to invest in real estate. Over the past five years, more than $6 billion of building permits were issued and the Canada Mortgage and Housing Corporation reported a significant increase in the number of housing starts. Other key sectors of Surrey’s economy are Clean Energy, Finance, High Technology, Advanced Manufacturing, and Agriculture.

Finding a Home in Surrey, BC

Surrey gives its residents the opportunity to rent or buy their homes near the beach, in active urban centres, close to parks, or on quiet farms. The city is comprised of six “town centres” (communities): Whalley/City Centre, Cloverdale, Fleetwood, Guildford, Newton, and South Surrey.

Cloverdale is the historic centre of Surrey and is known for its heritage sites. Surrey is a preferred location by many families with children for its parks, playing fields, schools, pools, and recreation centres.

Fleetwood is one of North Surrey’s quickest developing neighbourhoods. The Fraser Highway, which runs through this town centre, makes Fleetwood ideal for commuters. Fleetwood also has beautiful parks, natural areas, trails, and many playgrounds.

Guildford is on the northern corner of Surrey. It is famous for the 200-store Guildford Town Centre Mall, one of the largest malls in Canada.

Newton the town centre with the largest and the most ethnically diverse population.  More than half of the population is considered a visible minority, predominantly Sikh. Newton is home to the Kwantlen Polytechnic University campus.

South Surrey is known for its parks, beaches, forests, and recreation facilities. It the town centre preferred by seniors and it has the largest in Surrey concentration of people over the age of 60.

For information on rental rates, based on rental listings posted by Surrey property owners and managers over the past year click here.

According to the Fraser Valley Real Estate Board’s Monthly Statistics Package for September 2012, the combined average prices in Central Surrey, Cloverdale, and North Surrey were $570,175 for a single-family detached home, $307,556 for a townhouse, and $210,979 for an apartment.

In British Columbia, there are two main health insurance plans: the Medical Service Plan (MSP) and the PharmaCare. For those, who can not afford to pay the monthly MSP premium, there is Premium Assistance.

After getting medical insurance coverage, a newcomer should find a family physician. On its website, the College of Physicians and Surgeons of British Columbia, which regulates medical practice in the province, provides a list of physicians accepting new patients.

If necessary, family physicians refer their patients to specialists and to hospitals.
Patients who have not found family doctors can go to walk-in clinics.

To learn about non-emergency health issues and services in BC in Chinese, French, Punjabi, Spanish, and Vietnamese click here.

In British Columbia, parents can choose to send their children to public schools, independent schools, or homeschooling. Public schools are free. Surrey School District is the largest student enrollment in British Columbia. It has 99 elementary schools, 19 secondary schools, five learning centres, three adult education centres, a distributed online learning program, and a variety of satellite and inter-agency programs. In 2010/2011 the percentage of students graduating within six years of entering Grade 8 was 83.4 percent, which is three percent higher than the provincial rate. For a list of public schools click here. Independent schools offer specific religious, cultural, educational, or philosophical approaches. For more information click here.

Parents who choose to teach their children at home must register them with the Ministry of Education and follow their requirements.

In the Surrey campus of Simon Fraser University, students can enroll in programs and courses in applied sciences, arts and social sciences, communication, business administration, technology, education, mathematics, and science.

Called “The City of Parks” Surrey offers various opportunities for hiking, biking, bird watching and outdoor sports in its 600 parks and more than 200 athletic facilities.  For more information on Surrey parks click here.

Surrey also boasts some of Metro Vancouver’s best golf courses, which can match all skill levels.

Every year tens of thousands of people attend the Cloverdale Rodeo and Country Fair, which is the second-largest rodeo in Canada after the one in Calgary.

If you’re thinking of moving to Canada, check out our free webinars to learn more about living and working in Canada!