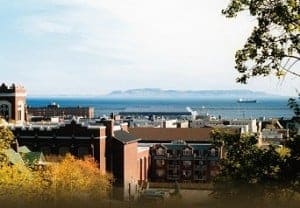 Thunder Bay is the capital of Northwestern Ontario and offers a relaxing, natural atmosphere with lively urban space, making it one of the most diverse places to live, learn, work, do business and play.

Thunder Bay is the sunniest city in eastern Canada with an average of 2167 hours of sunshine each year. The sun may be out even in winter and snow.
Summer gets warm, but cool in evenings, making it less humid and more comfortable than other Ontario cities.
The average daily temperature is -14.8 °C (average high -8.6 °C) in January and 17.6 °C (average high 24.2°C) in July. 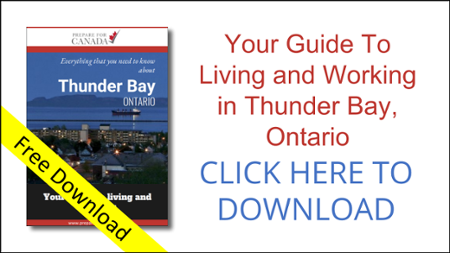 For information on driving in Thunder Bay and how to get a licence, see Driving.

Thunder Bay is home to Christian Churches of all denominations, as well as Jewish, Hindu, Muslim, Buddhist and Sikh, among many others.
Click here for a list of churches and other places of worship in Thunder Bay. You can also connect with local multicultural associations to find information about specific faith communities, places of worship and ethnocultural organizations in the city.

Our Webinars can help you make sure that you are fully prepared for your journey to Canada.

Located on the north shore of Lake Superior, Thunder Bay is rich in people and resources.
It is the largest community on Lake Superior. With a population of 109,140, it is the most populous municipality in Northwestern Ontario.
Thunder Bay is composed of two formerly separate cities, Port Arthur and Fort William which both still retain much of their distinct civic identities.
Thunder Bay is also the sixth most culturally diverse community of its size in North America, with representation from Finnish, Italian, Scottish, Ukrainian, Polish, French, Aboriginal, Chinese and Croatian ethnicities.

As the largest city in Northwestern Ontario, Thunder Bay is a vibrant and growing community and is the region’s commercial, administrative and medical hub.
From trees to transportation to research, health and life sciences, Thunder Bay has been developing its knowledge-based industries, primarily in the fields of biotechnology and molecular medicine.
The city is home to the western campus of the Northern Ontario School of Medicine, the first medical school to open in Canada in a generation.

Thunder Bay was ranked number 1 out of 227 major urban international cities for affordable housing, by the fourth annual Demographia International Housing Affordability Survey.
Average rent for a two-bedroom apartment is $763 per month. Average detached home sale prices are $324,604.
To find a rental apartment, you can check your local newspaper classifieds or online sites like Craigslist.
To purchase a home, contact a realtor in the area, who will guide you through the home-buying process.

Thunder Bay has one major hospital, the Thunder Bay Regional Health Sciences Centre, and many long term care centres operated by the St. Joseph’s Care Group such as the Lakehead Psychiatric Hospital, St. Joseph’s Hospital, and Hogarth Riverview Manor.
The Northern Ontario School of Medicine has a campus at Lakehead University.
Thunder Bay is also home to a variety of smaller medical and dental clinics.

You can find many recreational facilities in Thunder Bay as the city is home to 15 neighbourhood community centres, which offer various sporting and fitness facilities as well as seasonal activities such as dances.
Thunder Bay also operates six indoor ice rinks and 84 seasonal outdoor rinks, two indoor community pools and three seasonal outdoor pools, several curling sheets, and three golf courses, among others.
As well, Thunder Bay’s residents can benefit from the city’s proximity to the wilderness of the Boreal Forest and the rolling hills and mountains of the Canadian Shield to enjoy active lifestyles.
For a list of the city’s major facilities, visit the municipal website.