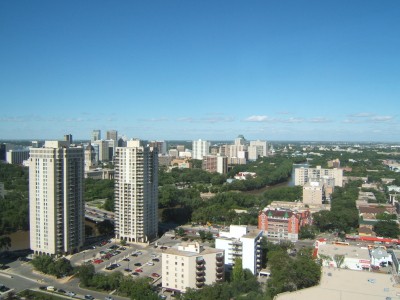 Winnipeg is the capital city of Manitoba and the largest city in the province. Over the past decade the Manitoba Provincial Nominee Program brought to Canada immigrants in record numbers and Winnipeg became home to more than 60,000 newcomers.

The strong population growth boosted Winnipeg’s economy, which was recently rated the third-fastest growing economy among Canada’s major cities. Being one of the Canadian cities that offer most affordable housing, Winnipeg continues to attract immigrants from around the globe.

Winnipeg is one of the sunniest cities in Canada. However, clear skies don’t necessarily mean warm weather. Manitoba’s capital experiences very cold and windy winters, which last from November to March. The average snow depth in January is 20 cm and the temperatures are between -22.8°C and -12.7°C. Extremes are not unusual. The lowest recorded temperature was at -45°C in February 1966.  Strong winds can make winter temperatures feel even colder than the actual temperatures. Wind chill is the index to indicate how cold the weather feels to the average person. In Winnipeg, there are about 49 days a year with a wind chill of -30°C or less. The coldest wind chill was -57.1°C in January 1996.

Summers are from May to August. Temperatures in July are usually between 19.5°C and 25.5°C. The highest temperature recorded in summer was 40.6°C in 1949. The city is hit by thunderstorms and sometimes tornadoes in springs and summers.
Winnipeg is threatened by severe flooding because of its flat topography and melting snow.

Winnipeg Transit provides the public bus service in the city. It operates 84 fixed routes. The buses run usually from 6 a.m. until pass midnight. You can find system maps and timetables at the Transit Administration Office (B-414 Osborne Street), the Millennium Library (251 Donald Street) and Winnipeg Square Service Centre (SW Concourse Portage and Main).  Also, Winnipeg Transit’s web site offers a trip planner where you can type your location and find out how to get to your destination. For transit fares click here. 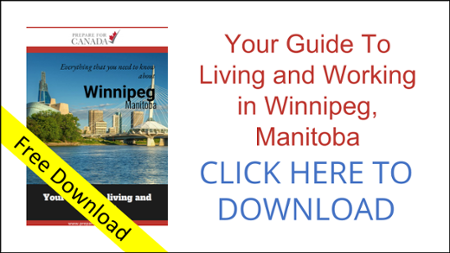 Christians make about 72 per cent of Winnipeg’s population. For a list of churches in the city click here.

Followers of Judaism can visit Shaarey Zedek Synagogue, which is a centre for Conservative Judaism.

After years of no population growth in the 1990s and even a net loss of 4,600 people in 1996, over the past decade there was a strong population growth and the city became home to more than 60,000 new residents. What highly contributed to this growth was the Manitoba Provincial Nominee Program that attracted immigrants in record numbers. For 2010 the top five professions received in Manitoba were industrial butcher, health professional, welder, truck driver and accounting and other types of clerks. The greatest number of newcomers came from the Philippines and Winnipeg became the city with the highest Filipino population percentage among municipalities in Canada. There is a significant number of immigrants from India and China as well.

Winnipeg’s economy is rated the third-fastest growing economy among Canada’s major cities. It is also one the country’s most diversified economies. Key sectors include advanced manufacturing, financial services, aerospace, agribusiness, transportation and distribution, information technology, furniture and apparel industries, life sciences and others.

The manufacturing sector ranges from food and beverage to farm equipment, buses, steel products, electrical components, aerospace components, chemicals, plastic and more. Winnipeg is the location of the Royal Canadian Mint – the plant where all Canada’s circulating coinage is produced. The Mint also manufactures coins for other countries, as well as medals, gold, silver, palladium and platinum bullion coins.

The financial service sector is one of the largest in country and the headquarters for some of Canadian biggest insurance companies and investment firms are located in Winnipeg. Due to the strong population growth over the past decade and the increased demand for housing, there is a building and real estate boom.

Unemployment rate in Winnipeg is 5.5 per cent, which is about 1.5 per cent below the overall Canadian rate.

For the last seven years the strongest demand and the majority of new homes built have been in the South area of the City – south St. Boniface, south St. Vital and Fort Garry.  Single family dwellings outnumber the amount of multi-family dwellings built.

Nevertheless, house prices in Winnipeg are still low compared to other cities in Canada. To learn more about the average cost to buy a house in Winnipeg, check out stats from the Winnipeg Regional Real Estate Board.

To learn more about the average cost to rent apartments and housing in Winnipeg, check out Rentals for Newcomers.

Residents of Manitoba are eligible for government health coverage. Newcomers should apply for Manitoba Health Card which they have to show every time they need medical services. Some services are not covered by the Government of Manitoba, but most employers provide additional health insurance.

After obtaining health coverage, a new resident of Manitoba has to find a family physician. Family doctors can prescribe drugs and refer their patients to specialists or to hospitals if necessary. The Family Doctor Connection Program provides an up-to-date list of Winnipeg family physicians accepting new patients. You can contact the Program by calling 204-786-7111.

If you haven’t found a family doctor, you can go to a walk-in clinic. Doctors at walk-in clinics can also give prescriptions and refer patients to specialists and hospitals.

In case of medical emergency call 9-1-1. To receive an ambulance service, you have to pay about $300.

The University of Manitoba of Manitoba is the oldest university in Western Canada. It offers over 90 degrees, diplomas and certificates, more than 60 at the undergraduate level.

Université de Saint-Boniface is the only French-language university in all of western Canada.

University of Winnipeg (U of W) has undergraduate faculties of art, business and economics, education, science and theology and offers also graduate programs.

Canadian Mennonite University is a private Christian university in the Anabaptist tradition.

Manitoba’s capital enjoys a substantial cultural life. There are many art galleries and performing arts venues in Winnipeg.  The largest gallery in Manitoba, Winnipeg Art Gallery, which has the biggest collection of contemporary Inuit art in the world, features every year touring exhibitions from all over the world. Centennial Concert Hall is the primary concert venue of the Winnipeg Symphony Orchestra, the Manitoba Opera and the Royal Winnipeg Ballet. Over 250 theatre performances are given yearly at the Manitoba Theatre Centre.

The city hosts Folklorama, the largest and longest-running multicultural festival in the world. Each year in August different countries are presented at 40 to 45 pavilions, and approximately 3,000 entertainers perform at more than 1,500 shows.