Edmonton is the capital of Alberta and the second largest city in the province. It lies on the North Saskatchewan River and in the centre of the Edmonton Capital Region.

Because of the massive oil, gas and oil sands reserves in Alberta, Edmonton is called the “Oil Capital of Canada”. The outstanding growth performance, the employment opportunities and the low Alberta taxes make Edmonton an attractive destination for migrants from other Canadian provinces and from across the world.

According to the 2016 Statistics Canada Census, Edmonton’s population was 1,062,643. People in Edmonton are mostly of European ethnicities – of English, German, Scottish, Irish, Ukrainian and French origin. Many immigrants in Edmonton used to come to Alberta from other Canadian provinces; however, over the past decade the number of international migrants is increasing.

The city is experiencing growth because of the good employment opportunities and the quality of life that Edmonton offers.. A large proportion (31%) of Edmonton’s population comprises people between 25 and 45 years of age – in their prime working, consuming and spending years. With this age profile Edmonton can expect further outstanding economic growth.

Edmonton is proud of being the fastest growing economy among the large Canadian cities. It also has the fourth-highest GDP of all Canadian cities. Since 96% of Canada’s oil reserves are in Alberta, Edmonton’s economy naturally focuses on the petrochemical industries. Oil supply and services, research and developing of new technologies ensure Edmonton’s prosperity even during global economic storms.

The city also experiences growth in the technology and biotech sectors. There is a strong presence of major employers like IBM, General Electric, BioWare, Telus and Afexa Life Sciences Inc. and others. Technology and biotech sectors are closely tied to Edmonton’s research and education centres.  Leaders in research are University of Alberta, Alberta Innovates – Technology Futures and the National Institute for Nanotechnology.

Edmonton is one of the sunniest Canadian cities – it receives 2,299 hours of sunshine per year. It has a dry climate with low precipitation. Nevertheless, summers are cool and winters can be very cold. The average daily temperatures range from ─11.7◦C in January to 17.5◦C in July.

In summer temperatures can exceed 30◦C  and in winter they can fall below ─20◦C for an average of 28 days.

For about 141 days per year snow depths are of greater than 1 cm – compared to about 88 days in Calgary and 65 days in Toronto.
In summer, thunderstorms and large hail are not unusual; however, extreme weather events are rare. Tornadoes are rare and weak. 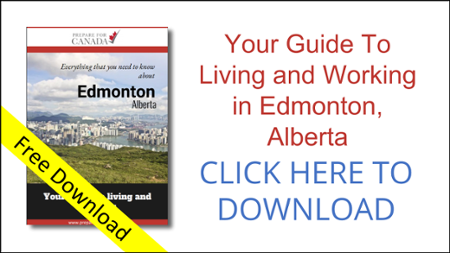 Passengers can use tickets, day passes or monthly passes. Tickets are sold at the ETS online store, at the vending machines at all LRT stations, and at the ETS Customer Information Center at Churchill Station. Tickets are valid up to 90 minutes from the time of purchasing from a vending machine, validated by ticket validator in LRT or deposited into a bus fare box in exchange for a paper transfer. Passes must be shown to ETC fare agents during fare checks.

Edmonton has the lowest gasoline and diesel prices in Canada and most Edmontonians use their cars in the city. Roads in Edmonton form a grid system with streets running from north to south and avenues running from east to west. When the city expanded in the 1980s, it ran out of street numbers in the east and avenue numbers on the north. The solution to this problem was the adoption of a quadrant system. The city is now divided into three quadrants: northwest (NW), southwest (SW) and northeast (NE) and the street names include the quadrants.

Edmonton winters can be challenging for drivers. Hazardous road conditions, frozen drifts and black ice are common. Even though winter tires are not mandatory in Alberta, they are important for the safety of everyone on the road. Even the best all-season tires are not as safe as a set of dedicated snow tires

A Seasonal Parking Ban is put into effect when there is a significant snowfall and major roadways need to be plowed.

In Edmonton there are places to worship for every major religion. There are churches, mosques, synagogues, Hindu, Sikh and Buddhist temples.

The Welcome Center for Immigrants (WCI) is an umbrella organization that  provides newcomers with information and resources. It is a one-stop service for settlement and employment related information in the region of Edmonton.

If you’re interested in renting an apartment in Edmonton, you can check out average rental prices at Rentals for Newcomers.

You can learn more about the average cost to buy a home and real estate trends in Edmonton here.

To receive advice and information about your rights and obligations as tenants under the Residential Tenancies Act can call the Landlord and Tenant Advisory Board. The number is 780-469-5959.

Most medically necessary health services in Edmonton are covered by the Alberta Health Care Insurance Plan (AHCIP). For prescription drugs and medical services not covered by AHCIP Albertans are advised to obtain supplementary health insurance.

The largest one is Edmonton Public Schools. It is one of the few Alberta jurisdictions that require all students to study a second language for six years – between Grade 4 and 9. It offers bilingual programs in Arabic, Chinese (Mandarin), German, Hebrew, Spanish and Ukrainian. It also offers courses in Cree, French, Japanese, Punjabi and American Sign Language.

The Edmonton Catholic School District operates 84 schools. To children of immigrants and to international students it offers ESL (English as a Second Language) programs as well as bilingual programs – French, Polish, Spanish and Ukrainian.  Students involved in the bilingual programs receive 50% of their instruction in the chosen language in kindergarten or Grade One and 35% at the secondary level.  The Edmonton Catholic School District also offers French Immersion Programs and French as a Second Language courses. For information on the registration process, click here.

The Greater North Central Francophone Education Region No.2 is the largest French language school board in Alberta.

Edmonton is often called “The Festival City” because of the many festivals that take place, most of them in Sir Winston Churchill Square in the Downtown Art District. Also located in the  Art District are the Citadel Theatre, the Art Gallery of Alberta, the Stanley Milner Public Library, the City Hall and the Francis Winspear Centre for Music, home of the Edmonton Symphony Orchestra.  One of the biggest theatre events in North America, the Fringe Theatre Festival takes place in Edmonton.

That’s a wrap on Blue Monday. Photo by @raymond_dam_ #edmontonliving

The West Edmonton Mall is the biggest shopping mall in North America and until 2004 it was the biggest mall in the world.  It is a great place for indoor activities in the cold winter months. Some of the attractions of the Mall are Galaxyland, the world’s largest indoor amusement park, which features more than 24 spectacular rides; World Waterpark, which boast the world’s largest indoor wave pool, the tallest indoor permanent bungee tower and more than 17 waterslides; Marine Life, an underground aquarium; Putt ‘n’glow, a glow-in-the-dark miniature golf course illuminated with neon flowers; and the Ice Palace.