The City of Vancouver is one of the top destinations for newcomers to Canada, particularly from the Asia-Pacific Region. That’s not surprising as it’s one of the most beautiful, livable cities in Canada and the world. It offers a mild climate, cultural  diversity, and awesome natural setting, all found in a growing metropolitan city.

The City of Vancouver has a population of 578,000. The larger region, known as Metro Vancouver, has 2,313,328 people. Thirteen of the province’s 30 most populous municipalities are located in Metro Vancouver, from West Vancouver to as far east as Langley and Maple Ridge.
The cities of Abbotsford and Chilliwack and the district of Mission, located past Langley and Maple Ridge, are part of the separate Fraser Valley Regional District.

Vancouver has a dynamic, highly diversified urban economy with growing knowledge-based sectors and strong global linkages. The city is one of Canada’s largest industrial centres thanks to its location on the Pacific Rim and at the western terminus of Canada’s transcontinental highway and rail routes. Vancouver also has the largest and most diversified port in Canada. Forestry and mining companies have their headquarters in Vancouver. As well, in recent years, the city has become an increasingly important centre for:

Vancouver is home to many large corporations, a strong mining industry, as well as technology, film and health care industries. Small businesses are considered the engine of the provincial economy. More provincial government jobs will be found in the province’s capital city, Victoria, on Vancouver Island, near B.C.’s Parliament Buildings, than in Vancouver.

Vancouver’s oceanic climate is the most moderate in Canada, with little snow. But, even though it’s mild, it’s also known for a lot of grey, rainy days, sometimes even in the middle of summer, which otherwise get quite dry and hot, reaching temperatures in the high 20s. Most of the rain comes between October and March, however. It has occasional arrivals of cold arctic outflows in winter that can sometimes last a week or more, leading to snowfall.

The annual average temperature in the region is 11°C, and is similar to other coastal cities like Seattle, Amsterdam, and London. 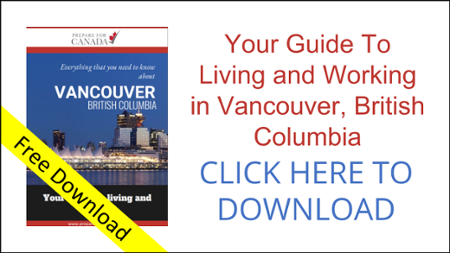 The City of Vancouver and the other cities and towns that make up Metro Vancouver are connected by various forms of public transportation, including buses, the SkyTrain (which connects Vancouver to Surrey and Coquitlam), the West Coast Express train, a commuter train that runs from Vancouver to Mission (about 70 kilometres from Vancouver), as well as the SeaBus (hovercraft boats that connect Vancouver to North Vancouver).

Finding a home in the Vancouver area can be challenging, especially the closer you get to the Vancouver proper. Housing affordability is a huge concern in the region, with many people choosing to live in homes in suburban cities like Coquitlam, Surrey, and Richmond, and commuting to Vancouver for work if necessary. But, over the last decade, people have been moving even further east as housing prices have continued to rise, or are choosing smaller, multi-family dwellings instead of single-detached homes.

While many newcomers want to live downtown for convenience and lifestyle,  home purchase and rental prices will be higher. The further east you go, the lower the prices. Learn more about Vancouver real estate trends and average house prices.

Renting or Buying a home

As you are in the process of choosing the best city in Canada for you, you’re probably also looking to rent or buy a home in Canada.  If you want to know the best way to do this, check our Renting your first house in Canada Webinar.

You can also check out our Rentals for Newcomers site. Here you’ll find a practical and easy-to-navigate site to help you find rental housing in Vancouver and make an easier transition to life in Canada! And you can even determine the average cost of rentals in Vancouver. This is helpful since rental prices change often.

British Columbia has a government-funded health insurance plan called the Medical Services Plan (MSP). It is only for British Columbia residents who are Canadian citizens, landed immigrants or government-assisted refugees. Post-secondary international students with study permits and people with work permits for six months or longer can also get MSP.

MSP pays for most health costs—for example, doctors, most medical tests, and treatments. However, some health costs, such as dentists and physiotherapists, are not covered by MSP.

Home to the world-class University of British Columbia (UBC), nationally-renowned Simon Fraser University (SFU) and a wide range of top-notch professional colleges, Metro Vancouver is one of the best places in Canada to pursue higher education.
UBC consistently ranks among the 40 best universities in the world, and is among the 20 best public universities.

The other public universities are:

Vancouver Community College and Langara College are publicly funded college-level institutions in Vancouver. They are augmented by private institutions and other colleges in the surrounding areas of Metro Vancouver that provide career, trade, and university-transfer programs.

Metro Vancouver is a popular destination for outdoor recreation, thanks to its mild climate and close proximity to ocean, mountains, rivers and lakes. The region boasts world-class parks, from the 404 hectares of prime downtown land that forms Stanley Park, to the many smaller parks that host recreational facilities, community centres, and specialty amenities such as off-leash dog areas and skate parks. Vancouver has close to 300 City-run parks, beaches, and gardens. This system includes the delivery of sports and recreational programs, social and cultural activities, educational programming and special events, through the many community and cultural centres, pools, rinks, golf courses, and specialty parks.

Within a 20-to-30-minute drive from downtown Vancouver are the North Shore Mountains, with three ski areas: Cypress Mountain, Grouse Mountain, and Mount Seymour. Mountain bikers have created world-renowned trails across the North Shore. The Capilano River, Lynn Creek and Seymour River, also on the North Shore, provide opportunities to whitewater enthusiasts during periods of rain and spring melt, though the canyons of those rivers are more utilized for hiking and swimming than whitewater.

For more information on recreational activities in Vancouver, click here.